Weddings – There are all sorts of great traditions for weddings The main ones remembered more often than not today is “Something old, something new something borrowed something blue....” however most people forget the last item on this old rhyme, “....and a silver sixpence in her shoe”.

Whether you are planning a grand affair or a small intimate day with only the closest of family and friends, you will find that yourself and others will concern themselves with making sure traditions and superstitions are followed! However do you know the real reasons behind the having a maid of honour, bridesmaids, best men, ushers, the white dress.....Here are some facts for you...Not all but some...

Tying shoes to the back of the wedding couples car comes from Tudor times where guests would throw shoes at the bride and groom and they would be bestowed with good luck should they or their carriage be hit! In Anglo Saxon times the groom would symbolically strike the bride with a shoe to establish his authority. Shoes would then be thrown to at the bridesmaids to see who would marry next. A far cry from the pretty bouquet of flowers that they now get to catch!

The groom will normally wear a button hole, and it traditionally should match a flower that is in the bridal bouquet. This dates back to medieval times when a knight would wear his lady's colours as a declaration of his love.


Sundays used to be the most popular wedding day as it was the one day most people were free from work. However in the 17th Century, Puritans put a stop to this believing it was to be improper to be festive on the Sabbath. Saturday's were rarely considered! “Monday for health, Tuesday for wealth, Wednesday best of all, Thursday for losses, Friday for crosses, Saturday for no luck at all”

Grooms, you choose your best men to make a speech, give you support on the big day and look after the rings, but years ago the best man was there and chosen in case for whatever reason the groom couldn’t make it. The best man would then marry the bride instead!

Bridesmaids were dressed in pretty dresses and followed the bride or walked in front of the bride to ward off and confuse bad spirits. 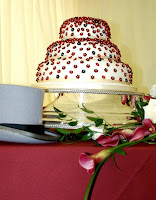 The new traditional 3 tier wedding cake is based on the unusual shape of the spire of Saint Brides Church in London, but originally the wedding cake was lots of little wheat cakes that were broken over the brides head to bestow luck and fertility.

The throwing of confetti is an ancient fertility rite. Handfuls of grain or nuts were traditionally thrown because they are “life-giving” seeds. In some European countries, eggs are thrown instead.

It was thought unlucky for a woman to marry a man whose surname began with the same letter as hers. The sentiment was summarised in the following rhyme: “To change the name and not the letter, Is to change for the worst and not for the better”

The term "honeymoon" originates from the times when a man captured his bride. The couple would hide from the bride's parents before marrying. The couple would remain in hiding for a further cycle of the moon after the wedding. During this period they drank honey wine.

However regardless of the traditions you choose to follow or not, you can be sure they date back many years, and will continue to be part of weddings in the future!
Posted by BW York House Hotel at 05:06 No comments: